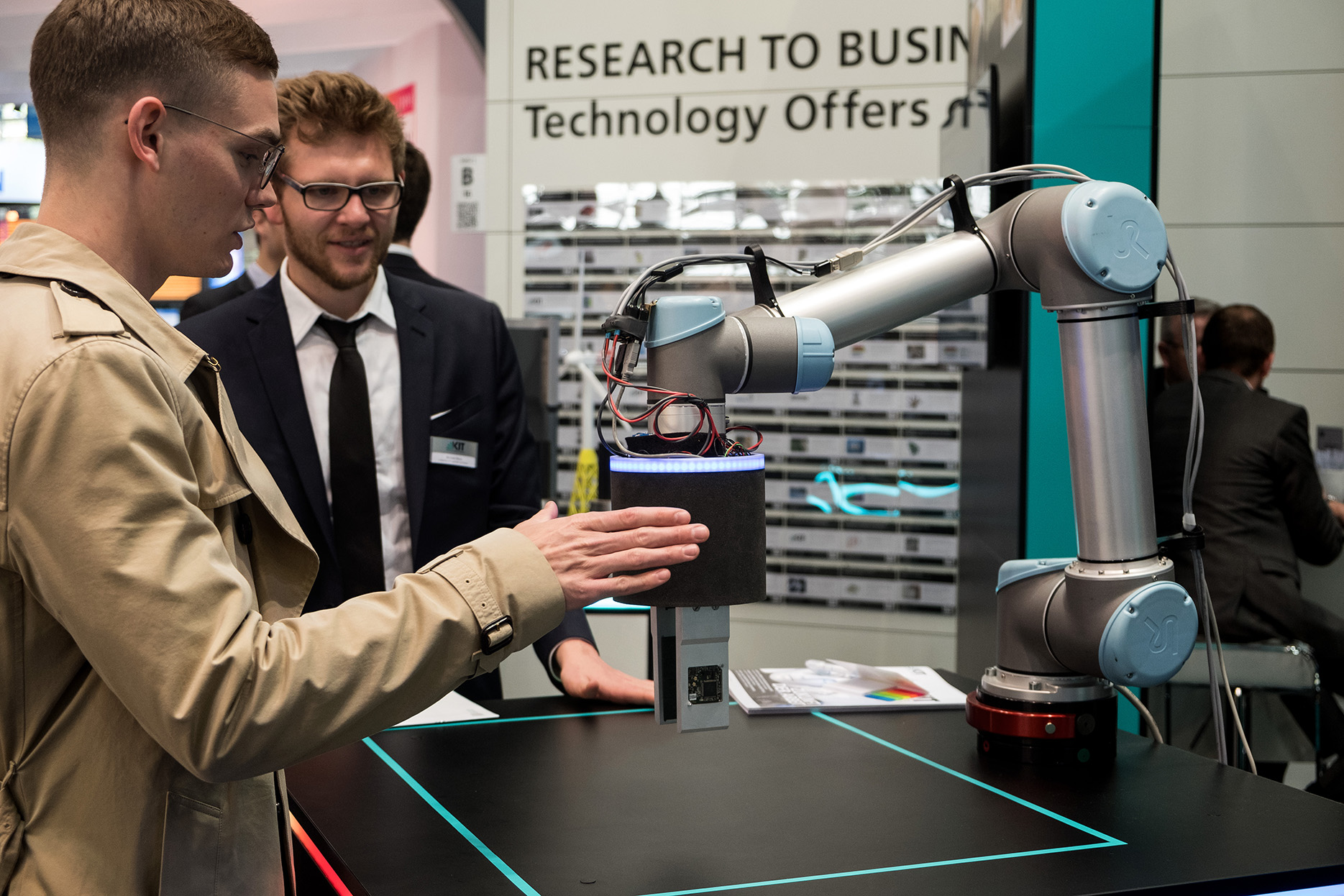 The interaction design studio LS301 focusses on the occurring questions within the implementation of autonomous technology and on the potential of interacting with collaborative machines. More and more smart products in our everyday life are able to preceive their surroundings, to take their own decisions and start moving autonomously in our environment. Currently the close interaction between man and machine can be experienced in the field of collaborative robots, so-called cobots.

The Hannover Messe is one of the most important industrial trade fairs worldwide. With this year’s slogan – connect & collaborate – it was the ideal place to get a detailed overview on current standards and future trends. However after eight hours and 40 booths it was shown, that despite the proclamation of a close teamwork with machines, there was hardly any innovation regarding the interaction. In the case of service robots for example it rather appears, that the developers got lost in old-fashioned stereotypes. Besides that, there were many examples of robotic production in combination with augmented and virtual reality. But especially assembly robots played a huge role at the trade fair.

In this context it’s all about collaboration. But not in terms of really working hand in hand. Teaching replaces hard coding. That means by moving the different axes of the robot, it memorizes the certain positions. From there on the machine repeats its routine autonomously. At this point every interaction is limited to external interfaces. This is no surprise. Because despite their ability to perceive their surroundings, these smart machines are remarkably limited in their communication. You can’t really tell, what their intentions are and that leaves questions begging to be asked. For example how do we know that the robot is aware of our presence? How do we know in what direction the robot is about to move? Or will it stop, if I cross its path? As long as those kind of questions remain unanswered, you will definitely experience a feeling of insecurity. That makes it really difficult to work close with the robot.

How can we physically interact without the need of a tablet interface?

Some attempts to answer these questions were presented in the research and technology hall. One example was KIT’s physical interface, which was directly attached to the robot. The combination of visual feedback, indicating motions, and the control function with capacitive sensors led to an intuitive interaction. So in every situation, the user is aware of the machines intentions and gets immediate feedback once he approaches his cobot.

At the end of the day, the claim „connect & collaborate“ was often limited to a robot handshake printed on a promotion pamphlet. But nevertheless the fair and discussions with exhibitors proved, that there is a great potential for defining how the collaboration between man and machine should be like in the future. There is a need for innovative solutions and for an authentic human-machine collaboration. A comprehensible interaction with distinct indications of the machines intention builds trust. And that is the key to a reliable collaboration. 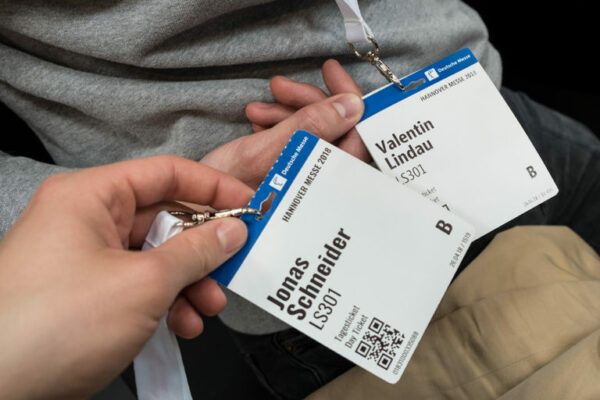 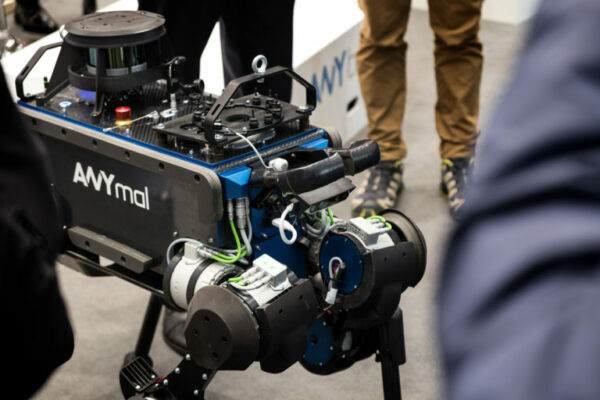 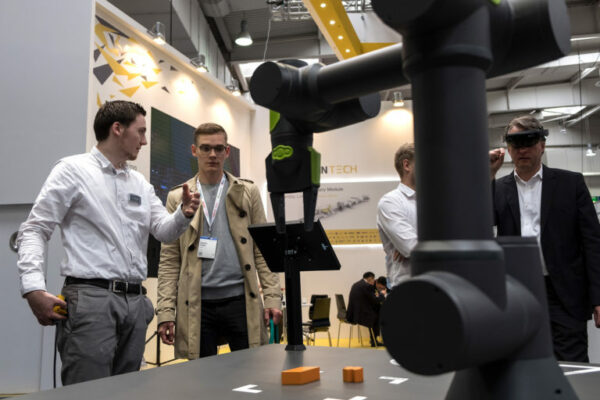 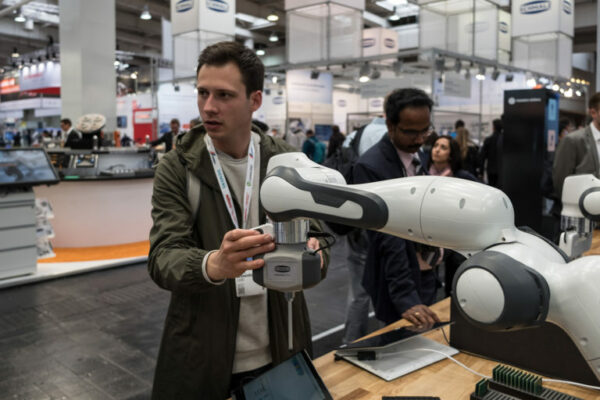 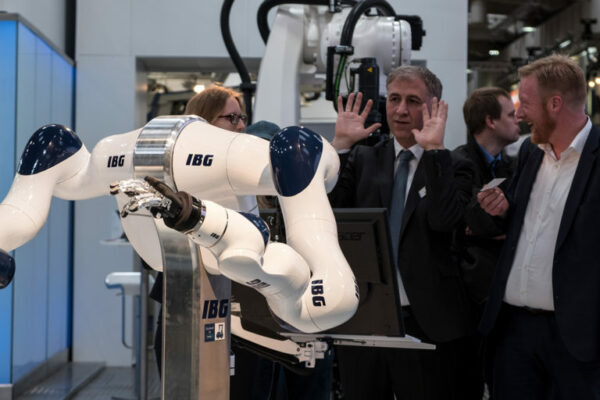 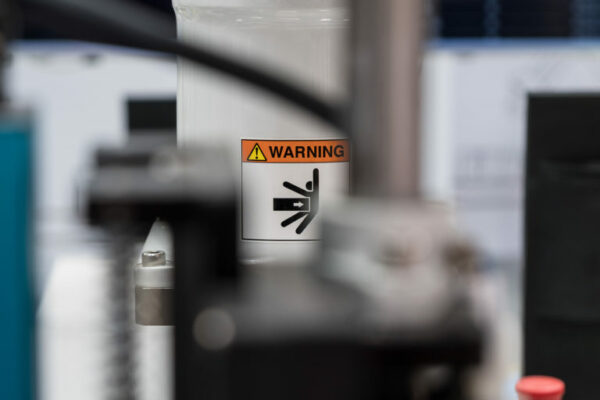 Published by Anastasia Zagorni in Exhibition